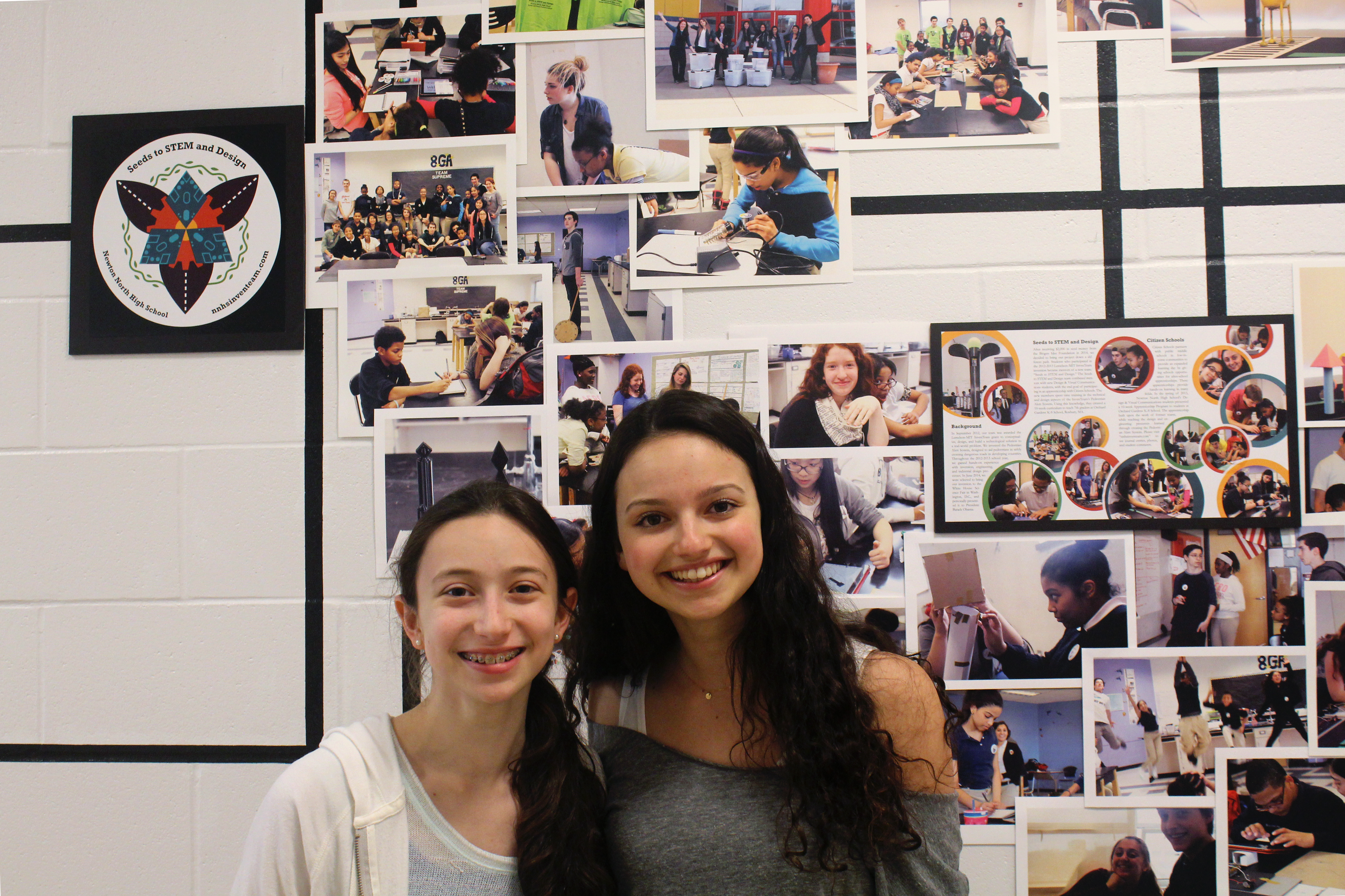 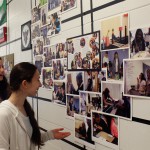 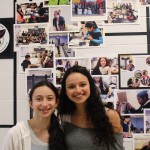 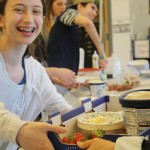 Newton North’s school newspaper, The Newtonite, recently published a wonderful article about the Seeds to STEM program. Throughout the process, two reporters, Emily Moss and Maya Abou-Risk, attended several meetings as well as one of the apprenticeship classes. They also stopped by our celebration for some ice cream! The following is the article they wrote:

The Power of Invention: From a North classroom to Ethiopia to Roxbury

By Emily Moss and Maya Abou-Rizk

On a Tuesday afternoon, 12 high school students and their teacher pile into a large white van, carrying bins full of tools, machine parts, laptops, and colorful art supplies. As the van speeds down the road, the students chat cheerfully about their days at school and discuss their plans for the next three hours, excitedly awaiting what is to come.

The students are on their way to Orchard Gardens School in Roxbury, where they teach a weekly enrichment program for seventh graders focused on design and engineering. While the program itself only began this year, it has been in the makings ever since 2012, when another group of North students developed a machine called the Pedestrian Alert System—the invention of which allowed them to collaborate with a school in Ethiopia, travel to the White House Science Fair, and even meet President Obama.

It all started in the design classroom at the end of the art hallway, where large white sketchpads hang above rows of computers and displays of student artwork. In the far left corner of the room lies the Pedestrian Alert System: a tall cylindrical machine looming over a model crosswalk with two miniature structures alongside it.

Members of the Design & Visual Communications class—taught by design teacher Sue Brooks—began building the system after receiving a $10,000 grant from Lemelson-MIT, a program which aims to inspire high school students to make a difference in the world through innovation and creativity, according to the program’s website and a pamphlet published by the design students.

Karen Fan ’14, who played a major role in the project, said that the students invented the Pedestrian Alert System with the goal of decreasing the number of road traffic incidents in Ethiopia, a country where there are few working traffic light systems and where driving is not always regulated safely. According to Fan, the students decided to focus specifically on Ethiopia because it has one of the worst road traffic fatality rates in the world, and Felege Gebru ’13, one of the other team members, was born there and knew what a significant problem road incidents were in the country. Brooks and Gebru also had certain connections there, according to Fan, and Brooks put the North students in touch with students at a school in Addis Ababa who could help them gain a better understanding of the common problems in the area.

Over time, the North students were able to build a machine that could sense a car’s velocity and indicate to pedestrians whether it is safe to cross. According to Fan, the students tried to “cater” their machine to Ethiopia by developing a system that could run entirely on solar power because electricity is unreliable in many areas of the country. They also ensured that the system could easily be recreated using recycled car parts, which are a fairly cheap and accessible resource there.

Two years later, Fan and Gebru displayed their machine to the President and White House staff members at the White House Science Fair. Fan noted that although she and Gebru were very nervous, it was a wonderful experience and “did not feel real” at the time.

Meanwhile, Lauren Lo ‘14 spearheaded an effort to apply for a grant from the Biogen Idec Foundation, which would allow them to teach a design and engineering program for middle school students based on the Pedestrian Alert System.

“We learned so much,” said Fan. “Our main point was that we wanted to spread that experience to other people. And what better place to do it than Boston.”

After learning that they had received the Biogen Idec grant last year, Fan, Lo, and Paroma Mallick ‘14—who had also been very involved in the original design process—passed their knowledge on to a younger group of design students who would later lead the program at Orchard Gardens School. These students, Bradley Trepanier and Alex Vrahas, who are now juniors, and Liran Federmann and Isabella Jackson-Saitz, who are now sophomores, were responsible for developing a curriculum to teach middle school students how to build smaller models of the Pedestrian Alert System.

“I don’t think I’ve ever done something like this before where I learned something and got to turn around and teach it,” said Jackson-Saitz.

Federmann, Jackson-Saitz, Trepanier, and Vrahas said that they began by trying to anticipate all of the potential questions that the seventh graders would ask about the program – ranging from how old the high schoolers were to how the different pieces of the Pedestrian Alert System worked. From there, they divided the questions into categories based on sophistication and tried to predict whether the students were more likely to ask them at the beginning, middle, or end of the 10-week program.

In the fall of this school year, eight new North students enrolled in the Design class joined the team of teachers. The old members from last year (Federmann, Jackson-Saitz, Trepanier, and Vrahas) were responsible for training the new members. Together, the team members fine-tuned their week-by-week agenda detailing what they wanted to teach and accomplish during each session.

The program began on Tuesday, February 24 and continued every Tuesday afternoon until May 5.

Each week, the North students guide the middle school students in designing their own miniature models of the Pedestrian Alert System, helping the seventh graders to brainstorm and sketch creative ideas while also teaching them technical skills, such as how to strip wire or how to use design software on an iPad. When the students are finished, their models will be printed in 3D by a company called NVBots.

At the end of every session, the seventh graders write journal entries about their experiences, and the high school students mentoring them later write responses. The day after each visit, Brooks and the North students also hold a meeting to reflect upon their experiences, discussing the challenges and successes of the previous session and publishing weekly blog posts about their work.

At the end of the program, the seventh graders will present their work at a school showcase called the WOW Event, which will take place this Thursday and will be open to the public.

So far, both the North students and the Orchard Gardens students say they feel the program has been quite successful.

Federmann noted that although some of the students were shy at the beginning, they have over time become very enthusiastic. “A lot of them say they look forward to it every week,” he said.

Trepanier added that he did not expect he would relate to the younger students as easily as he did and that over the course of the program, he and the other North students have developed close relationships with the middle schoolers. In fact, Trepanier’s experiences have been so positive that he is reluctant to see the program end.

“I’d love to repeat it next year,” said Trepanier, adding that he would even be interested in expanding the program to reach other schools.

The response has been similarly positive among the middle school students from Orchard Gardens.

“I never thought I could’ve done something like that, but I did it,” said one student, referring to the Pedestrian Alert System.

Another student noted that the program feels particularly relevant to him because he has always been interested in engineering and loves to take apart machinery to see how it works.

After high school, he said he hopes to attend MIT to study engineering.

“I’m going to do something to help the world,” he concluded.

← Apprenticeship at Orchard Gardens: WOW Week
Welcome Back To Design! →